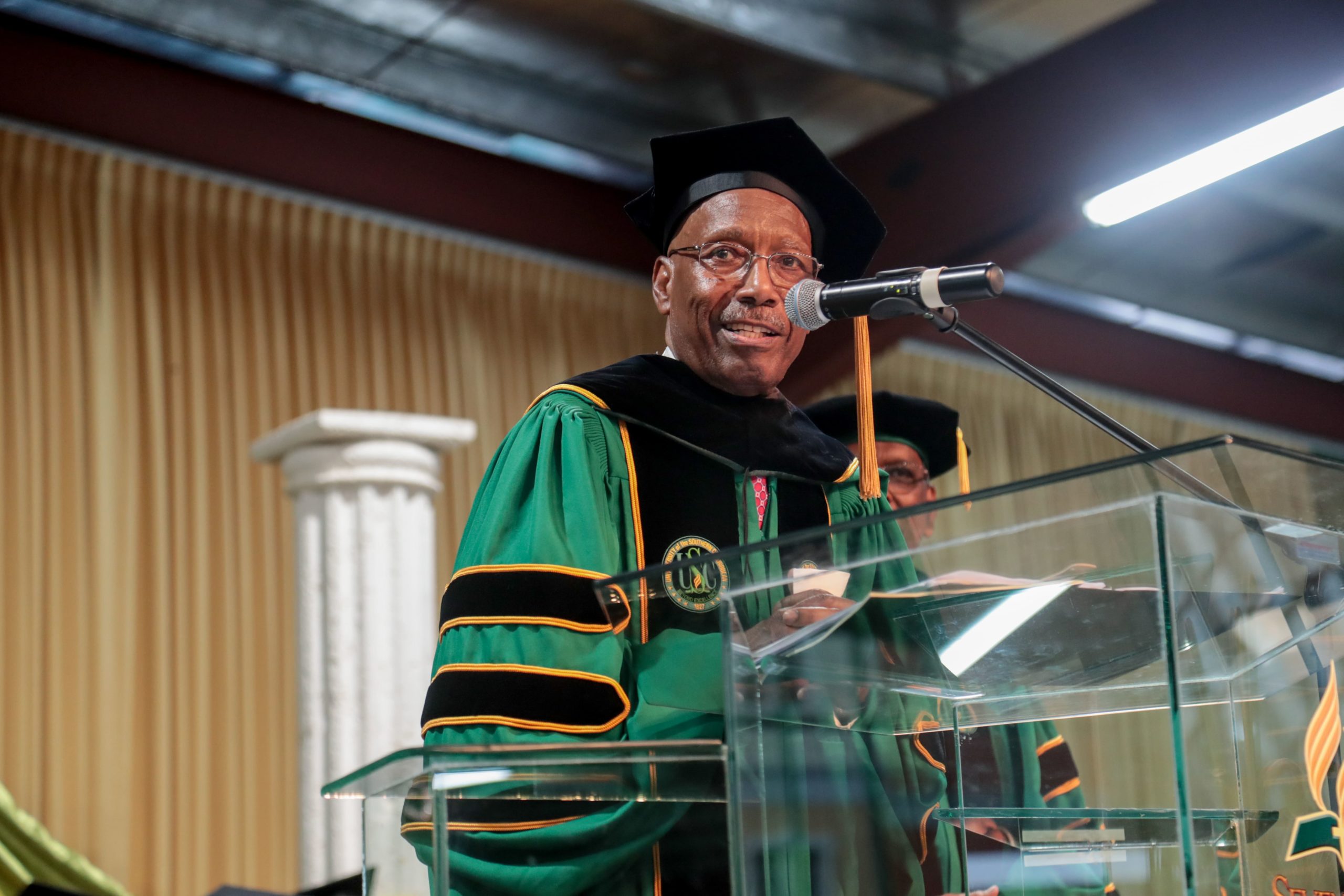 Gordon Ornsley Martinborough was born to Maisey and Gordon Martinborough Snr.  in the colony of British Guiana (now the Co-operative Republic of Guyana) on November 12th 1936. He was the first of their four children. His father was employed as a policeman while his mother was an industrious homemaker. And so, the circumstances of Pooksie’s childhood were humble yet stable. Pooksie was his childhood alias, his home name. He is remembered by his sister, Shirley, as being a caring, bread-baking, older brother, tainted too by the common mischievousness of boyish childhood, but exceptional in his pursuit of a relationship with God and manifesting from early on, an intense devotion to prayer, biblical and academic scholarship and to evangelism and mission – a precocious priming for the greatness he would become when he would put away childish things. He also displayed in his youth an affection for church work. This blossomed in his teenage years as a member of the Buxton Seventh-day Adventist Church. Here he served as the leader of the local Missionary Volunteers Society (now called the Adventist Youth Society). In this capacity, his skills as an organizer and church leader truly developed. Gordon purposed to enlarge the territory of his preparedness for the Master’s service and his teachability abetted this well.

After completing his secondary education, Gordon Martinborough entered the teaching service and was assigned to the Enmore Government School. There, he excelled as a young teacher, so much so that when he wrote the first round of examinations in a three tiered teacher qualification system, he was adjudged as being qualified to be exempted from the second round.

In 1959, young Gordon Ornsley Martinborough and his best friend Roy Israel McGarrell, who also taught at the Enmore Government School, demitted the teaching service together and enrolled at Caribbean Union College (now the University of the Southern Caribbean) to study for the gospel ministry. Predictably, Gordon took with him a steadfast fidelity to fineness and was determined to succeed with the help, or above the hindrance of his instructors. His commitment to an active prayer-life did not suffer the pressures of study. His comrade, Roy, remembers of their college years that they would habitually “rise at 5:00 a.m. when sleep was ‘sweetest’ to go to the old broom shop to pray.  We prayed together in the first session, then we separated to have our personal conversations with our heavenly Father.”  With the winning combination of such faith and hard work, Gordon did exceedingly well in his studies at CUC so that he was selected as the valedictorian of the class of 1961.

It is at CUC, too, that he was drawn to Waveney Hinds who reciprocated his interest.  Deep love and friendship resulted and in 1963 they were married and remained happily so, until the time of his passing. Gordon and Waveney Martinborough were soulmates, partners in parenthood and in ministry.

Pastor Gordon Martinborough’s denominational career has been inspiring and impactful. He has served the church in various capacities at various rungs of the structure of the world church, resolutely maintaining a passion for evangelism and keeping a wide berth from mediocrity and the ease of ordinariness.  After being employed as an intern and district pastor in the Guyana Mission, a discomfort with his probably overworked voice, led him to Loma Linda Hospital in California, USA in search of a remedy. While there, he grasped the opportunity for further education, earning a Baccalaureate degree in Religion and History in 1972 and an MA in Church History in 1976 before returning to Guyana. In 1980, he was elected to the presidency of the Guyana Conference (the Guyana Mission became a self-supporting conference in 1976).

Following an outstanding term as Personal Ministries Director of the Caribbean Union Conference (CARU), he was elected to its presidency in 1991. As President of CARU, he assumed the chairmanship of the Board of Trustees of Caribbean Union College. In this capacity he worked with board and the administration of then college president Dr. Sylvan A. Lashley to persuade the government of the Republic of Trinidad and Tobago to forgive an insurmountable TT$12,000,000 debt that encumbered the college. Here, the fortuitous entering wedge was probably the goodwill generated with government insiders after the Executive Secretary of CARU, Dr. Peter J. Prime, found the lost wallet of a senior Cabinet Minister and returned it to him unharmed – God’s ways are past finding out.

Under Pastor Martinborough’s chairmanship and Dr. Lashley’s presidency, the enrolment at CUC grew from around 300 students in 1991 to in excess of 1000 students in 1995, residential accommodation for students was expanded, the Science Complex was completed and furnished and the University Auditorium was relocated to a far more commodious space at the present site.  Dr. Lashley recalls that:

Every day, at noon-day, he would call me to pray for the campus.  This made an indelible impression upon my mind.  He displayed a high sense of trust and faith…. Dr. Martinborough championed family life as a ministry and this became a part of my leadership practice also… Thank you Dr. Martinborough for your triumvirate example of prayer, faith and family. It has shaped my own ministry of practice and has become your gift to leadership in the Adventist world church.

In 1995 he rose to the Inter American Division where he served in various roles including Associate Ministerial Secretary, Vice President, Division Evangelist and Co-director of Family Ministries with his wife, Waveney. Pastor Martinborough was also instrumental in bringing the Adventist Laymen’s Services and Industries (ASI) movement to the IAD.  Throughout his meteoric flight of promotions in his denominational career, his passion for soul-winning and developing superior implements for evangelism never abated. Gordon Martinborough was a thinker, a teacher and a prolific writer who thought, taught and wrote to his ministerial calling and practice.

Consonant with this, he wrote and published several manuals, Bible lessons, seminars and books on practical, family life and health evangelism. His written works have been published in several languages and successfully deployed in diverse cultures globally. His published works include: New Life Campaign Kit (1979), Operation Andrew Manual (1980), Health and Life Lessons (co-authored with Pastor Collin Parkinson (1984)), Family of God Crusade Handbook (1989), Family Life Evangelism Manual (1992, 2004 & 2010), I Love You (1995), Happy Family Bible Seminars Study Guides (2002 & 2006), Health Evangelism Campaign Manual, (2018) and the Healthy and Happy Seminar Study Guides (2018). The number of souls persuaded for Christ through the far-flung reach of this aspect of his contribution can only be numbered by heaven.  Martinborough also published articles in the Adventist Review and the Ministry Magazine.

In 2005, he retired from denominational employment but never abandoned his duty to the gospel commission. He co-founded Happy Family Bible Seminars International with his wife, Waveney, and targeted the global community with their brand of practical family life evangelism and wellness. The programmes they have produced for television have been aired regionally and globally on 3ABN, Safe TV, Hope TV and LLBN.

Pastor Gordon Ornsley Martinborough has led an incredibly inspiring life that has personified the mission and motto of USC, his alma mater. He has modelled what an “extraordinary servant of God to humanity” looks like and in his 84 years on this earth has managed to go “beyond excellence!”  For his life and work, the University of the Southern Caribbean conferred on this deserving recipient the Doctor of Divinity honoris causa at its eighty-fifth graduation ceremony in 2018.

The ultimate valediction for a life so richly lived composes a swansong of complex and variegated emotions – the melancholy of bereavement for precious loss co-mingled with the celebration of triumph, achievement and completion.

The board of trustees, administration, faculty, staff, students and community of the University of the Southern Caribbean joins in the mournful celebration of the life and work of the late Dr. Gordon Ornsley Martinborough. We express our heartfelt condolences to his wife Waveney, their three children, Dr. Esther Biamonte, Samuel and John Martinborough, their son-in-law, Dr. Marco Biamonte, his sisters, Dr. Shirley McGarrell and Mrs. Dolly Teixeira, their husbands, Dr. Roy McGarrell and Clement Teixeira and a host of cousins, nephews and nieces, personal and family friends.

Another decorated soldier of the cross has been called home to rest after serving distinguished tours of duty in the Master’s service. Psalm 116:15 instructs us that “Precious in the sight of the Lord is the death of His saints.” The Lord counts it as “precious” that Dr. Gordon Ornsley Martinborough is finished with the troubles of this world. May we allow the life of this exemplary alumnus to inspire us. 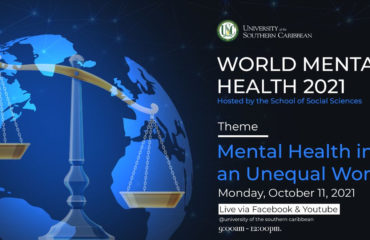 Mental Health in an Unequal World