A significant milestone in the University’s history was met on July 2, 2018, one day after the 2018 Graduation exercises took place on the USC campus. The age-old dream of erecting a Church at USC became a reality when the groundbreaking ceremony for the state-of-the-art Church and Mission Center took place at approximately 10:00 am.

Attended by Church leaders, USC administrators, faculty, staff, church members and representatives from nearly all the fields within the Caribbean Union Conference of SDA, attendees celebrated the day’s arrival.

For years, members of the Caring University Church have worked toward erecting a structure dedicated to the honour and glory of God. The project was made more possible through the partial assistance of the World Church’s 13th Sabbath offering and donations from church members and other key stakeholders. This support has provided the building project with the resources needed to make substantial progress, but there is still a long way to go.

Dr Hilary Bowman, University President, during his brief remarks at the ceremony mentioned, “This is the time for this church, this is the time; it will happen…Our super goal is to have this church built and dedicated on the 22nd of December, 2019. Let’s have the faith.”

Speaking briefly at the event, Dr Kern Tobias, President of the Caribbean Union Conference, and Chairman of the USC Board of Trustees brought greetings to the USC Church leadership on reaching this milestone. His brief message was entitled “Please Build Me a Sanctuary.” He noted that God has had a perpetual plan throughout history, a plan that serves as a reminder that God was/is among His people; and that plan is a sanctuary.

Following the message from Dr Tobias, the USC Church leadership and USC administration launched a fundraising campaign that will help garner funds which will be used to further the building. Pledges were made not only by the various field Presidents but also by church members and administrators alike.

One such donor attending the event on July 2nd was USC Church member Cecelia Mahabirsingh. The 75-year-old retired nurse, speaking to the audience shared how she was inspired by the Holy Spirit to give of her best to the completion of the USC Church. She noted the number of blessings that were being bestowed on her since her decision to give monthly toward the cause.

Construction on the Church and Mission Center begins on August 27, 2018, the day that USC celebrates its 91st Anniversary. 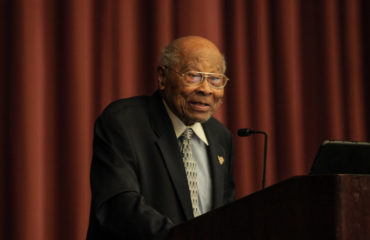