The University of the Southern Caribbean will hosts its eighty-fifth graduation exercises from June 29 – July 1, 2018, in its University Auditorium, Maracas Valley, St. Joseph. Two speakers have been announced for the Commencement Ceremonies which will take place on July 1, 2018.

Dr. Richard Hart currently serves as President of Loma Linda University Health, the umbrella corporation that includes the enterprise’s academic, healthcare, and research organizations. He earned his Doctor of Medicine degree from LLU School of Medicine in 1970, followed by a Doctor of Public Health in International Health at Johns Hopkins University in 1977, also becoming Board certified in Preventive Medicine.

Dr. Walter B. T. Douglas, is a native of Grenada and an alumnus of the former Caribbean Union College, now University of the Southern Caribbean. His embryonic training for ministry took place on these hallowed grounds. He was founder and director of The Institute of Diversity and Multiculturalism at Andrews University. Prior to serving as director, he served as Affirmative Action Officer and Ombudsperson for ten years. He also served for 35 years at the Seventh-day Adventist Theological Seminary at Andrews University as professor of Church history and History of religion. Ten of those years were served as Chair of the Church History department.

Through his varied professional experiences, Dr. Douglas has had the opportunity to work with and train hundreds of individuals in a diverse array of backgrounds and cultures. His distinguished career as an international lecturer and diversity consultant, has took him far off lands inclusive of Australia, New Zealand, several countries on the vast African continent, Asia,

South America, Europe, the Caribbean and across North America. Dr. Douglas has also published widely on issues of diversity, multicultural education, cross-cultural communication, institutional assessments, world religions, missions and Church history. He has won many awards and received various distinctions over the years.

The eighty-fifth Graduation exercises will be broadcast live from the University’s website and from the social media platform – Facebook. 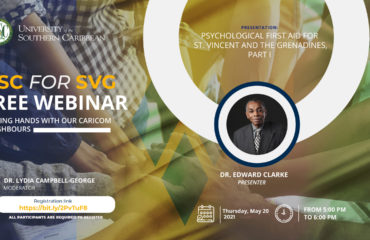 Webinar: Psychological First aid for St. Vincent and the Grenadines